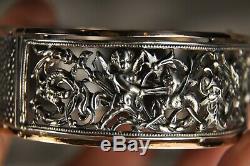 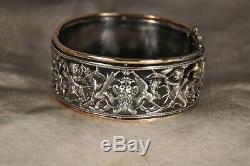 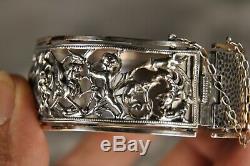 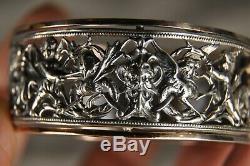 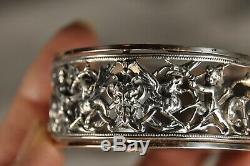 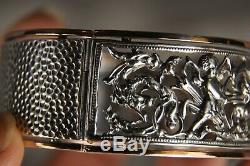 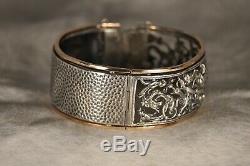 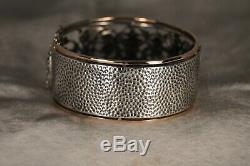 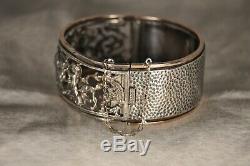 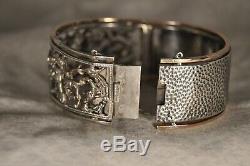 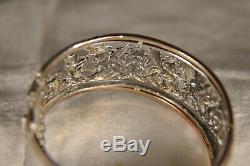 Beautiful old bracelet 19th century, Napoleon III, in silver, not punched, which is very common for jewelry of the 19th century. The bracelet was duly tested with acid and authentication of the material will be secured by a bill that accompany the package. The bracelet of the decoration consists of putti, chimeras and grotesque. It is bordered by hoops vermeil.

A small welding point on the side, near the clasp and a little lack of branches. This is very visible - view photos. On the same side, gold is worn on the edge of hoops.

The bracelet closes very well and the safety chain is in good condition. Inside Diameter: 5.8 cm. The pictures are part of the announcement. Thank you to look good.

Superb ancient strap from the 19th century, napoleon iii period, in sterling silver, not hallmarked, qui is very common for 19th century jewels. The wristband has-been tested Correctly acid and the authentication of the material will be guaranteed by an invoice That will Accompany the package. The decor of the strap Consists of putti, chimeras and grotesque. It is bordered by vermeil hoops.

A small weld on the side, near the clasp and a small Lack of branches. It's very little visible - see the pictures.

Sami On the side, the gold is worn on the edge hoops. The band closed very well and the security chain is in good condition.

Inside diameter: 5.8 cm. Photos are an integral portion of the ad. Thank you for watching 'em. The item \The seller is \This article can be shipped worldwide.